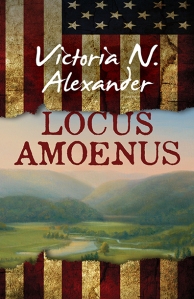 A tale of dark political corruption, betrayal and a through the looking-glass world where you can believe six impossible things before breakfast, Locus Amœnus is also a fiercely funny romp by a talented writer.
Locus Amœnus is now available on Amazon at a 10%  discount.

“Alexander’s Locus Amœnus is a biting, witty, and ultimately touching window on modern American life. She evokes the wit and depth of the best of Kingsolver and high satire and earnest social exploration of Pynchon or Delillo. Her experiences bridging the worlds of rural and urban northeastern America provide those of us with experience of both a welcomed bit of nostalgia, longing, familiarity, and a sense of loss. This story is to be savored, and hopefully re-read in certain existential moods.”

Order Locus Amœnus direct from the publisher, The Permanent Press, or from Amazon today for a  10% discount.

“This brilliant, searing political novel deserves to be read by all of those interested in the current and future state of the United States of America. Darkly comic, wry and witty, Locus Amœnus is a genuine pastoral, a critique of the bloating and corruption of American life that draws on Hamlet for its dissection of politics, relationships, and love in post-9/11 America. From Swift to Shakespeare, the literary antecedents for Locus Amœnus are wide and varied, but the novel that emerges is wholly original and haunting in its graphic depiction of contemporary American mores and failures. I can’t recommend Victoria N. Alexander’s new novel enough.”

Order from Permanent or from Amazon.

A satirical examination of how we live in the 21st century, in the United Estates of America, with less civilization and more discontents than hitherto. Amidst nostalgic reflections on our past, Victoria notices current absurdities and contradictions in our appetites and critique of consumerism, and despite the tragedy, we have the consolation of her humor. I haven’t laughed this well while reading in a long time.
Locus Amœnus is available now on Amazon.

Brilliantly combining Shakespeare’s knowing personal-political masterpiece, Hamlet, with post-911 ruminations of an edifying diversity of characters inhabiting Amenia in rural New York, novelist Victoria N. Alexander manages to do the three things that Nabokov says a good novelist must do: tell a story, inform, and enchant. Locus Amœnus, a short, sweet, sui generis blend of contemporary adult fiction and geopolitical drama, reminds us that something may be rotten in more than Denmark.

Locus Amœnus will be out soon.  You can pre-order from Amazon at a  13% discount. (This discount decreases as the pub date nears!!) 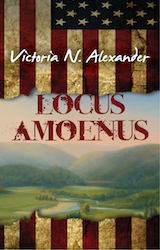 Okay, so maybe picking a Latin phrase, Locus Amœnus, with its weird spelling, for the title of my latest novel might make it a little hard for people to recommend it to friends. (If you  order now from Amazon you can get 13% off.) Locus amœnus can be pronounced in English, Low cuss a men us, with stresses on “low” and “a.” In Latin you want to make “amœnus” sound more like “a moin us.” I have also heard amœnus pronounced “uh mean us.” Any of these are acceptable. This is America, after all.

Locus Amœnus means “pleasant location,” and it’s used in poetry to describe a restful place where nothing bad ever happens. It also happens to be the scene of the crime in many of Ovid’s tales, an idea which fits well with the theme of my novel. I couldn’t pass up this phrase for my title, despite its awkwardness, because the story is set in the rural upstate town of Amenia, a would-be pastoral paradise where I own a sheep farm. The name “Amenia” of course comes from the same Latin word as amœnus. Amenia is, by the way, variously pronounced  as “Uh many uh” or “Uh meanie uh.”

The fossil fuel industry has an enormous impact on politics, the economy, and our health. This pollution Goliath is just too powerful to fight with government regulations. Take matters into your own hands and put vegetable oil in your fuel tank.

Electric cars will also be a good green choice some day. Unfortunately 44 percent of electricity is generated at coal-burning plants. The new construction of wind farms and run-of-the-river hydroelectric dams to power our super high-efficiency electric cars should be part of our long-term green energy strategy, but such projects require huge start-up funds and massive political support. People who want to help fight environmental pollution and disentangle our politics from the Middle East now — with the technology that is currently available — can run their diesel vehicles on vegetable oil. 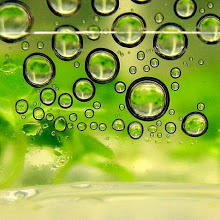 Although burning vegetable oil does release carbon into the air, this carbon is already part of a natural cycle of plants taking in CO2 from the air and releasing oxygen. When plants decay, the stored carbon is released back into the environment. Burning vegetable oil does not add more carbon into the atmosphere than is already part of the available carbon constantly being recycled. In contrast, the carbon in fossil fuels is brought up from deep below the surface and added to the amount of carbon in the atmosphere. END_OF_DOCUMENT_TOKEN_TO_BE_REPLACED

Great News! My new novel, Locus Amœnus, will be published by Permanent, the same press that did my first and third novels, Smoking Hopes 1996 and Naked Singularity 2003. Help me make this novel a success by going to Amazon.com and posting quick 20-word reviews of my other books and boost my ratings. I am really happy to be working again with Permanent Press editor and publisher, Judy and Marty Shepard, and their new partner Chris Knopf, who have built their small press into an impressive, independent not-quite-so-small press, which, as the New York Times says, publishes some “literary gems” on a “shoestring” budget. I signed the contract today, and they expect the hardcover to be in bookstores early 2015. Advance review copies available soon. I’m looking for blurb writers and reviewers too. Let me know if you want a free e-copy now.