Preview of Covid-1984 The Musical, Chapter Two.  (Not ready yet? To catch up, go to Chapter One.)

This installment is dedicated to Thomas, Heather and Valerie. Thank you for your support.

Orwell fans will appreciate Chapter Two as I begin to follow the outline of 1984’s opening scenes. As I noted in my introduction to the first chapter, I’m releasing this novel in installments even though I haven’t yet written the final chapters.  I hope to provide us “proles” with a way to imagine how to bring down the Big Brother machine, because bring it down we must.  Let’s make (up) history together. I still don’t know exactly how my Winston Smith is going to overcome the propaganda and the torture, but I’m getting some ideas when I look around me and I see all the people in the streets and online standing up and saying, I will not comply.

Keep up hope. Keep  your sense of gallows humor. Keep singing. Danser Encore.  It shows our strength, and it’s really disconcerting for our would-be tyrants. END_OF_DOCUMENT_TOKEN_TO_BE_REPLACED

Locus Amoenus, 9/11 novel by Victoria N. Alexander, has been nominated for the 2016 Dayton Literary Peace Prize. Since 2007, the DLPP has awarded $10,000 each year. Previous recipients include, Bob Shacochis for The Woman Who Lost Her Soul, Junot Díaz for The Brief Wondrous Life of Oscar Wao, and Francine Prose for A Changed Man. The 2016 winner will be announced in September.

Locus Amoenus is now available as an audiobook, narrated by award-winning actor Ben Jorgensen, from Audible.com and iTunes. END_OF_DOCUMENT_TOKEN_TO_BE_REPLACED

Next month, I will be talking to a group of anti-war activists about the role of literary fiction in undermining the bad narratives that prevent critical thinking. I look to my favorite political satirist, Mark Twain, as an example.

When Huck Finn ponders whether or not he should turn in his friend Jim, a runaway slave, he is deeply conflicted. Good Christian society of the day has taught him that slavery is sanctioned by God. Huck truly believes that to help Jim escape would be immoral. But he decides, “All right then, I’ll go to hell.”

It’s moments like this in literature that serve humankind best in its often-halting progress toward tolerance and peace. Throughout history, good, decent people routinely condone revenge, segregation, greed, fascism and war, simply because they follow those they admire most. Every era has its own peculiar blindness, and going against complacency and conformity of neighbors can be more difficult than directly confronting a tyrant. It is often a disenfranchised voice, such as Huck’s, that awakens the literature of a nation, makes it more self-critical. Sometimes the voice needs an author—a humorist, a poet, or a good story-teller—to help him speak in a way that he can’t be ignored or further ostracized. END_OF_DOCUMENT_TOKEN_TO_BE_REPLACED

Live Interview 6:30PM CST
http://www.logosradionetwork.com/pm.cgi?action=show&temp=listen
Call in to speak on the air live at 512 646-1984

Locus Amoenus synopsis: In this dark comedy, a 9/11 widow and her son, Hamlet, have retreated from Brooklyn to the idyllic rural countryside upstate, where for nearly eight years they have run a sustainable farm. Unfortunately their outrageously obese neighbors, who prefer the starchy products of industrial agriculture, shun their elitist ways (recycling, eating healthy, reading). Hamlet, who is now 18, is beginning to suspect that something is rotten in the United States of America, when health, happiness and freedom are traded for cheap Walmart goods, Paxil, endless war, standard curriculum, and environmental degradation. He becomes very depressed when, on the very day of the 8th anniversary of his father’s death, his mother marries a horrid, boring bureaucrat named Claudius. Things get even more depressing for Hamlet when his friend Horatio, a conspiracy theorist, claims Claudius is a fraud. The deceptions, spying, corruption, will ultimately lead, as in Shakespeare’s play, to tragedy.

Robert McIlvaine, father of Bobby McIlvaine who was killed in the lobby of the World Trade Center North Tower on September 11, posted a review of Locus Amoenus on Amazon.

END_OF_DOCUMENT_TOKEN_TO_BE_REPLACED 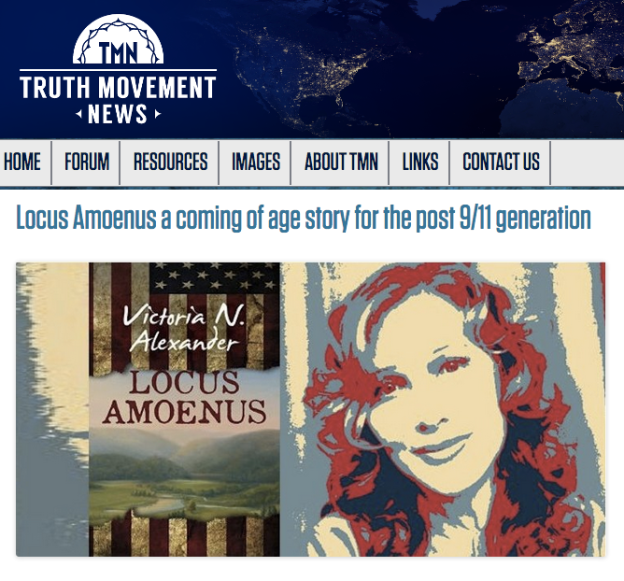 Victoria N. Alexander’s latest novel, Locus Amoenus, turns Shakespeare’s moody dark Hamlet (something is rotten in the state of Denmark) into a glib, manic 9/11 conspiracy theorist who discovers that something is very rotten in the United States of America. The 191-page novel was released at the end of June and hit #2 in Amazon’s dark humor category briefly in August while Kurt Vonnegut’s Slaughterhouse Five held out at #1. The novel has been highly praised outside of truther circles for its originality and acerbic wit, taking on, not just the inexcusably lax 9/11 investigation, but also pointing out the disastrous consequences of federal top-down control, for example, farm subsidies and nutrition guidelines, pharmaceutical subsidies, standard curriculum, and the “jobs and security” provided by the weapons and intelligence industries. Mainstream reviewers, award-winning novelists, and other celebrated critics have favorably compared Alexander to James Joyce, Jonathan Swift, Thomas Pynchon, Lewis Carroll, Barbara Kingsolver, Vladimir Nobokov, and Don Delillo, as well as the bard himself. Could this be a breakthrough for the truth movement? END_OF_DOCUMENT_TOKEN_TO_BE_REPLACED

In Locus Amoenus, a 9/11 widow remarries and her son, Hamlet, learns from Horatio, a conspiracy theorist, that something is rotten in the United States of America.

END_OF_DOCUMENT_TOKEN_TO_BE_REPLACED

Locus Amoenus by Victoria N. Alexander centers upon the bucolic county seat of Amenia in upstate New York where Gertrude and her son Hamlet make their home after the horror of 9/11 deprived them of husband and father respectively. Seeking a new start in the rural quiet, Gertrude purchases a sheep farm where they intend to live a sustainable lifestyle butchering their own livestock, growing vegetables, and eschewing the material trappings and celebrity-devotion of the modern world. The Webutuck school district, where Hamlet attends classes, greet Gertrude’s healthy food campaign with suspicion and distrust; populated by overweight teachers overseeing equally rotund students, they are all fed on processed, pre-packaged, warehouse-shipped food portions that fast-track the next generation to dull-eyed diabetes. Gertrude’s persistence leads, eventually, to Hamlet’s expulsion END_OF_DOCUMENT_TOKEN_TO_BE_REPLACED