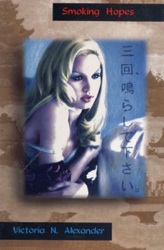 Synopsis: A back-sliding atheist journeys through Japanese hostess bars in search of her estranged husband Gottlieb.

Winner of the Washington Prize for Fiction

“A dark comedy with cunning observations.” –The Dallas Morning News

“A solid, moving and funny work.” –The Met (Cover Story)

“Few narrators … have been presented with such uncompromising honesty, such deep and deliberate introspection.” –The Dallas Morning News

Published by The Permanent Press.

The view from my apartment on Thirteen Alley describes the backs of buildings along Fourteenth. Below, my neighbor’s three-year-old, a gorgeous ink-eyed Peaseblossom, crayons on the front stoop. Slouching next to her is an older, untroubled, much envied promiscuous sister. Caveman, the building super, gingerly walks his rat-sized Chiquita around homeboy slalom course while a boom box plays hiphophouse. Father down, a sidewalk party features neon-clad kids splashing in a wrench-opened Hydra while “papis” sit in crippled kitchen chairs around a hibachi, watching broken chickens turn from ocher to black. As a white girl passes, trailing a cellophane banner of dry cleaning, the cry “mami” and ask God to bless her. It’s August at night.

The apartment house overlooks the street with uncurtained window like many televisions for viewing (mine is the fifth from the left, Caveman glances up, catches my eye). Noises filter out though fly screens. Snatches of neighbors’ answering machines, double-you-be-el kicking S FM, the wail of shark-toothed toddlers, and National Public Radio swirl together with fried odors and exhaust in the airshaft. It’s a good sound, an important sound. It’s got flat notes and minor characters, melodies, squawks and cat howls. It’s got bottom, but no rhythm.

Living in an uncurtained apartment I’ve become indifferent, more or less, to being watched, to watching. I occasionally glance out the window over the sink, while washing seventeen coffee spoons, at the redhead in the next building who stares into her refrigerator, thinking. Then she seems to forget, whatever it was, and closes the door. I watch her do this.

Imagining my own audience when I walk naked from the tub I hold in my gut. I put my panties on before my bra and roll my stockings on with pointed toes. Just little things. I’m both actor and slightly reluctant audience to every outtake, mistake and scene. I manipulate the medicine cabinet mirror so that its view holds the other mirror on the adjacent wall. I stand transfixed by this unfamiliar view of myself–a view to which others are privileged but is rare and strange to me. Is this how other see me? Is this how I am seen?

I move around my apartment alone as if someone were watching me. An omniscient narrator in my head has taken His place, narrating my life silently in third person and even employing adverbs to embellish my actions. In the center of my mind, just under Wernicke’s area, I deposit acquaintances, even loves, into Dickensian categories. Encumbered with metaphors, similes, and epitaphs, which are as gaudy as costume jewelry, I maneuver theatrically throughout my days.