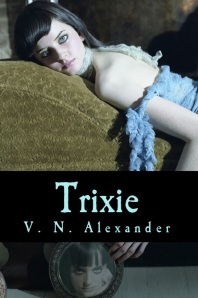 Synopsis: A satirical look at feminine sexuality and strip clubs in the American media

“A fresh, impish, and superbly sexy story, Trixie makes no attempt to represent realistically seedy topless bars or McStripper gentlemen clubs. Instead, Alexander’s gorgeous novel convincingly imagines what strip clubs would be like if women had their way. Loveable yet elusive, Trixie and her cohorts will tease and fascinate the reader. Men will revise what they think women really want and women will inwardly smile. Alexander’s lively, clever prose digs deep and illuminates. A poetic delight at every turn, funny, impudent, and revealing.” –Paige Turner, Capitol Times

Alexander pulls back the curtain on strip clubs and the women who work in them. –Kirkus

“Alexander [is] the most entertaining feminist since Gloria Steinem or Madonna.”-NYTlMES

“A modern-day pastoral set in a strip club, this story will surprise even the most cynical reader. You’ll ache with laughter. Bravo! I didn’t want the dancing to stop.”-E. Z.  Reid, Port City Watch

Inside the Girlie Playhouse white afternoons are still discreetly extinguished in candlelit rooms, while outside the demonstrators have begun their second week. The street is lined with sleeping bags and coolers. Activists hoot and holler muddled slogans. Misguided, albeit well-meaning, City University students from the Oppression Studies Department show their support, passive, by sitting on the curb eating avocado wraps. Matrons and old ladies wag banners and jerk pickets, respectively. I have to go under the police department’s clumsy blue sawhorses just to get into work. As I do so, one of the Gideon Angels in a provocative red cap worn stylishly askew shows me her poster: “A Woman Is Not A Plaything.”

I suppose she means Trixie. She was once my partner: pale waifish, with long limp black hair and navy eyes. Trixie still skips through my sphincter-clenching dreams. On stage, her skin reflected blue light, mine reflects pink. She liked sequins; I like feathers, and we danced sometimes in sync.

I loved the girl, so I can understand why just the idea of her keeps them up at night, keeps their confusion tickly and keen. She was attractive, absolutely, but with a trace of tawdriness about her that—irritatingly, unreasonably—made her all the more fascinating. The Angels formed a loose circle around the Playhouse and made their demands. Our boss invited them in to have a look for themselves, but they declined. Then came the cameras. Unfortunately the outline of Trixie’s story is, I confess, perfect for the tabloids, chock full of sex and controversy. But there’s more, if one cares to look. I’m still waiting for public television to arrive, set up and start filming a proper documentary. Anything would be better than Inside Story.

Everyone, no doubt, has heard about the married man who won seven million dollars in the lottery and squandered it on seven strippers? Well, I was one of the seven, and Trixie was the favorite. (We actually received less than seven million, but the alliteration was too much for the press to resist.)

The story hit when the wife filed for divorce. Her husband—whom we knew as “Max”—was portrayed as a toothy libertine, though he was actually too preoccupied to smile much. He had a silver-backed gorilla build and slow thoughtful speech, which made him a natural target for an impatient press.

The dancers fared no better. During the televised proceedings, an “expert witness”—one of our own, redheaded Audrey—provided some pretty damaging testimony. She disclosed all the details about how and why the “prodigal playboy” had taken us to a beach side “motel” (actually, it was an inn), and how we had each been paid for our trouble with a red sports car. In the wake of all this negative news coverage, the Girlie Playhouse became the neighborhood hot spot for about one week, and we really “raked in the dough” as reporters were quick to point out. But now that the initial excitement has died down only the dregs remain. Most of my regulars have been scared away. Gadflyish rumors are going around that we will soon be closed down, boarded up, condemned.

Max’s wife won her suit. When she came out of the courtroom, she looked in the cameras and sobbed, “Max, I still love you. Come home.” I, like everyone else no doubt, pitied Max’s attractive, humiliated little wife. Her lot was truly sad, however common.

Trixie’s story, on the other hand, is gorgeously uncommon. My aim in telling it is to be kind, but above all, thorough; to be truthful, but more than that, poetic—after that farce on TV—I’d always thought Trixie was inexplicable, not easily reduced to a type. But they managed it. Yes, indeed. My own method is to complicate the issue rather than to clarify. You will never find me resting on one side or the other. To make a judgment, you see, is to stop feeling.

These days—besides the mulish protestors who have vowed never to go away—only the odd, lingering foreign correspondent remains, those who haven’t quite given up on the possibility of a miraculous reappearance. What gets me most is the cruel stupidity of it all. And it is funny, yes. That’s what’s so horrible about it. I was laughing, with some anxiety though to be sure, right up until the last few seconds. Now, I, like a whore, unpack my heart with words. It was just a few hours after the second edition of Inside Story aired that Trixie was killed. The reporter, Simone Lambat, is now a great penitent. So much so that I feel guilty that I haven’t told her that it wasn’t all her fault. But, at the risk of sounding worse than I am, I must say, I enjoy seeing Simone wriggle.

It was actually Simone who suggested that I inform the public in general and the media in particular as to the true facts of the case. She feels I might rectify her misrepresentation of Trixie. Believe me, I’m not as interested in making Simone feel better as I am in making Trixie look better, but as Simone’s interests happen to be served by my own, I will oblige her. And so it is that I have decided to speak to you at Channel Nine, to you feminist journalists at the Newgate Say and even to you Gideon Angels.

Naturally, my version disputes Inside Story‘s. Trix was not merely a tramp who trapped gullible husbands, but it’s a little too difficult to say exactly what she was. Life is really lived at the crossroads: that’s where you feel moral distinctions most; that’s where you come to know. And I—I have known the taste, as it were, of both the moral and the immoral often enough to guess at the difference. That’s more than most could say. So you see there’s reason to give one pause. The Girlie Playhouse deserves a fair accounting too, one that sees into the dressing room. And how far does one have to go? Not so far—be not alarmed—just far enough to touch the hem of the garment. That will do. It must do. No one who hasn’t lived a dubious life can imagine what it means, finally, to decide what’s right and what’s wrong, for her, for him, for now, for then. But then you’ve anticipated such denials. Indulge me a moment. I loved Trixie—all the girls, the whole business—well enough to look intently and long. I know. My entire life has been an expression of my peculiar love for girls with meretricious charms. The mere clicking of pave-worn high heels down an empty corridor gives me a thrill.

But whence came my special fondness for topless dancers? From out of my past, that’s where, straight out of my past. Let me explain.

Yes, I was wholly enamored of Trixie; that’s indisputable. Never let it be said that I admired merely the idea of her or the symbol for which she stood. I loved her. I loved her thin arms, her automatic laugh and her brutal temerity. I loved her more thoroughly and intimately than anyone before or since. But she wasn’t the first.

When I was very young, I loved another famous stripper who met a bad end for her terrible pride. So when Trix came along, I was equipped with a kind of horrible hindsight. This precursor of Trixie’s, this slain starlet, was my own mother.